If you have questions, sugggestions, want news or links added to the site, submit files for the archive or redirect, or submit a video for the Tactical Ops TV YouTube channel contact me with the links below.

Submitting Files
Don't send any files as email attachment, upload them to a file sharing website such as Zippyshare or Google Drive and send the links.

The file archive was first online on the domains tacticalops.tk in 2014, then tacops.tk in 2015. From early 2017 to early 2019 it was hosted on to-files.nl and after that it moved to tactical-ops.eu. I started to dislike the generic sounding "to-files", sounds too much like a random file site filled with ads that apear on google. Having tactical-ops part of the domain is also better for google search results. Too bad all other "tacticalops" and "tactical-ops" domains are taken, but atleast .eu was cheap.

Between the downloading and collecting of files in late 2014 i started the Tactical Ops Channel on YouTube, both trying to show simple guide videos with downloads links in the video descriptions and to show that there are still servers and players online. A few other TO players have also contributed many videos to the channel, view the About page on the channel for more info.

In 2014-2015 i saw that allot of TO websites went offline and there were only a few left. I thought if this continues then in a few year all custom files would be vanished. With the main focus on custom maps, i started to download all files i could find from the internet. Searching with Google and Bing i found all remaining websites and downloaded all files i could find. After this i started to download maps from servers before i realized i could download complete server redirects from both TO and UT99 servers.

When i was sorting all custom maps a few problems were encountered such as allot of maps included files that would overwrite official TO files, maps with different files with the same name, maps with missing packages, filenames with spaces and other http redirect incompatible characters and this all had to be fixed. Since allot of the old map downloads had missing files and some even corrupt files there was decided to repack all maps and mappacks to seperate files with all packages included.

One of the biggest breakthrough was finding a stash of old "hidden" redirects from long forgotten TO servers by a game-server host who still had all their redirects online. Also i found a public 90+ GB UT99 redirect with various old TO maps and other TO redirects which i downloaded completely. This combined with all the maps downloaded from the last few remaining online websites and all online game-servers i had quite a stash of files to start an archive with.

At one point i came across the site tactical-ops.org back in 2016 that also started a project to repack all maps into induvidual downloads. I found some new maps there but they stripped all readme files from the maps. Which i then tried to track down and add afterwards. In the end of 2017 i also came in contact with the LST Crew and they gave me acces to their map collection and redirect so i could download everything they had which also led to many new maps. I also have been contacted by some old TO websites such as Spielwiese and old server admins who send me their map collections.

Luckily with the large collection of packages it was also possible to find certain lost packages that were missing from all old TO maps and mappack downloads. The missing packages that got permantly lost over time have been recreated to make all those maps playable. I did the easy ones and the difficult ones i couldn't repair were done by "Sp1r1tSuxor".

The collecting, testing of all maps and repairing of some maps was very time consuming. Luckily the sorting process of repacking all maps with all required packages, the removal of modified official files, the removing of duplicates and checking of different files with same names could all mostly be automated with help of various programs. (7-Zip, MyMapManager, AntiTwin, BatchFileRenamer)

The map screenshots was something i decided to start early 2018, but realized quickly it takes allot more time then estimated to start every map and find optimal screenshot position. In summer of 2018 at 1200 maps screenshotted i stopped since at that time i was adding allot of new maps to the collection in folders once completed. Then almost a year later in May 2019 i started again and did another 450 screenshots. In July 2019 "Spike" contributed 300+ map screenshots and completed the S folder and started on the B folder. In October 2019 "Sp1r1tSuxor" submitted 100+ map screenshots and completed the B folder. Now the total count is 2300/2760 maps screenshotted and only maps in * folder are remaining.

In the summer of 2018 a project was started with the help of "Sp1r1tSuxor" to convert all the old maps that wouldn't work on TO 3.4 & 3.5. Currently over 300+ maps have been converted and less then 5% remains but the work on those maps grinded to a halt. In about 2 weeks of constant converting and repairing textures i managed to do most of the easy ones. The difficult and time consuming are all repaired by "Sp1r1tSuxor" in the period afterwards. After this it seems "Sp1r1tSuxor" took it upon himself to convert allot of the old SWAT maps, he has currently done 90% of those. He also converts UT99 maps and even makes brand new maps in 2019.

For this reason in 2017 i built a server with an Intel G3258 "Pentium Anniversary Edition" CPU, these little Haswell based cpu's could be overclocked even on a non Z87/Z97 motherboard chipset with the proper bios. So i bought a cheap H81 motherboard and delidded the CPU and was able to run a maximum cpu frequency of 5.2Ghz on 1.53v.

The motherboard didn't allow memory overclocking i was stuck to DDR3-1400 @ 7-7-7-20 timings, i bought an oldskool low timings DDR3 kit to squeeze out every bit of performance to try make the mapvote run faster. For storage it was using an old Samsung 830 Pro 128GB SSD.

After passing 2048 maps this mapvote would crash and i even ran 2 servers for a short time with all maps split up over 2 servers...

Untill one day randomly searching google i found updated version of MapVoteUL that supported up to 4096 maps and didn't need to reload the map list every map change. This changed everything and now the server was actually usable and didn't require an insane CPU frequency to fix the super slow map change. (Since the server is only single threaded)

At the beginning i hosted the server from my home, a year later it was hosted 1.5 years from the place i worked, afterwards a short time period from my home again. Now its running from a VPS in Germany.

Below some pictures of the delidded CPU with too much Liquid Metal paste and picture from the Case. Had a nice Arctic Freezer 11 Low Profile Cooler and didn't look that bad in an old Acer case. 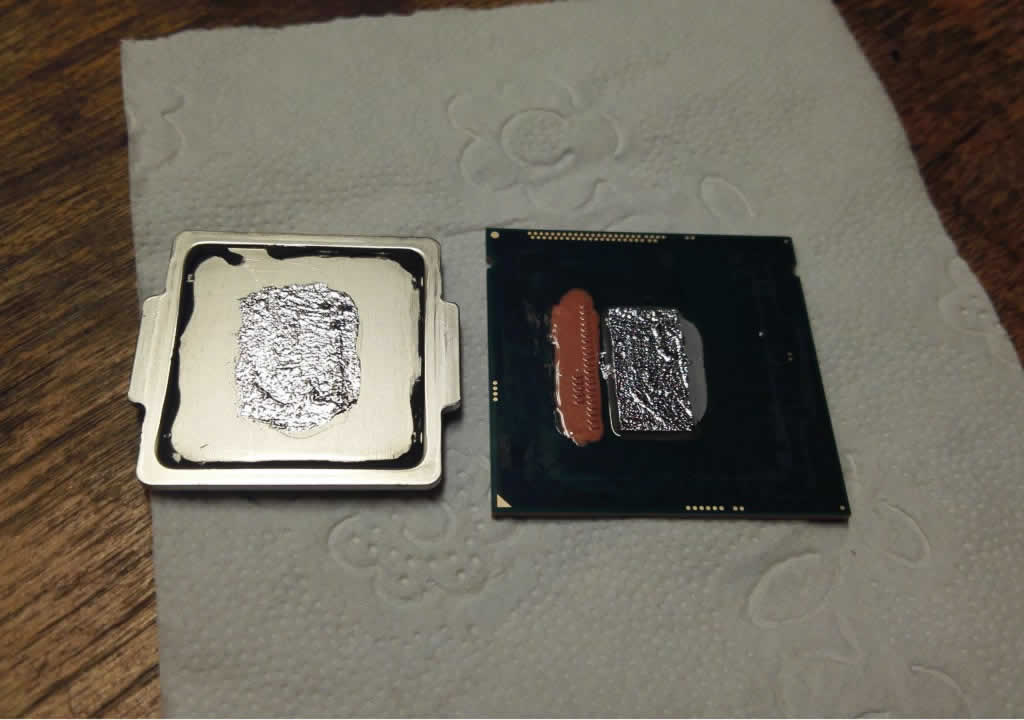 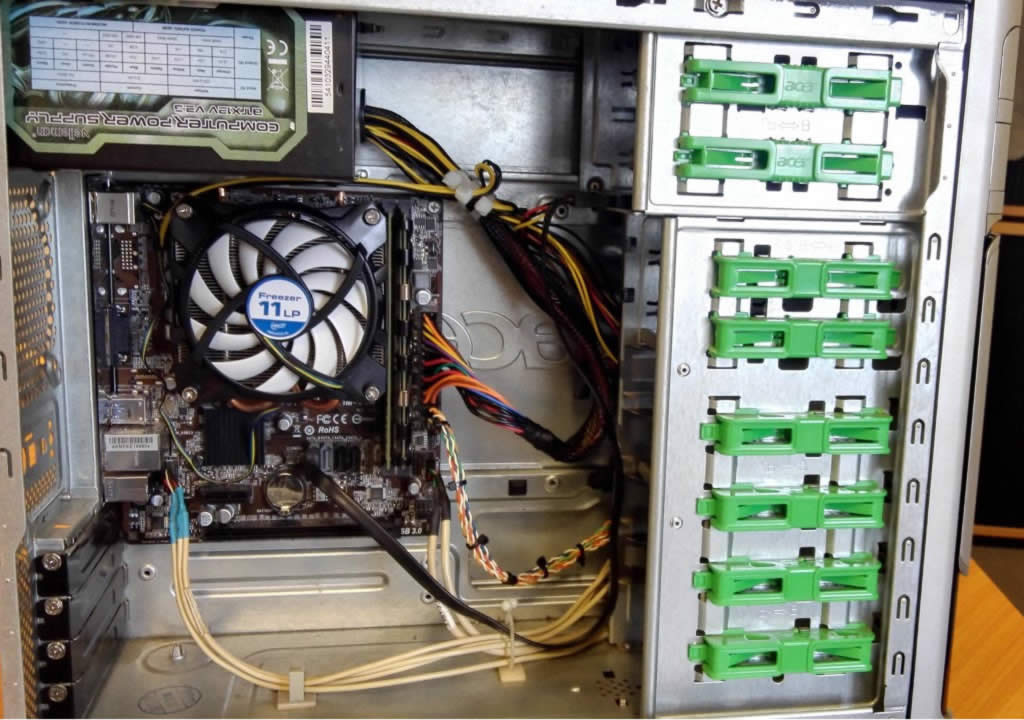